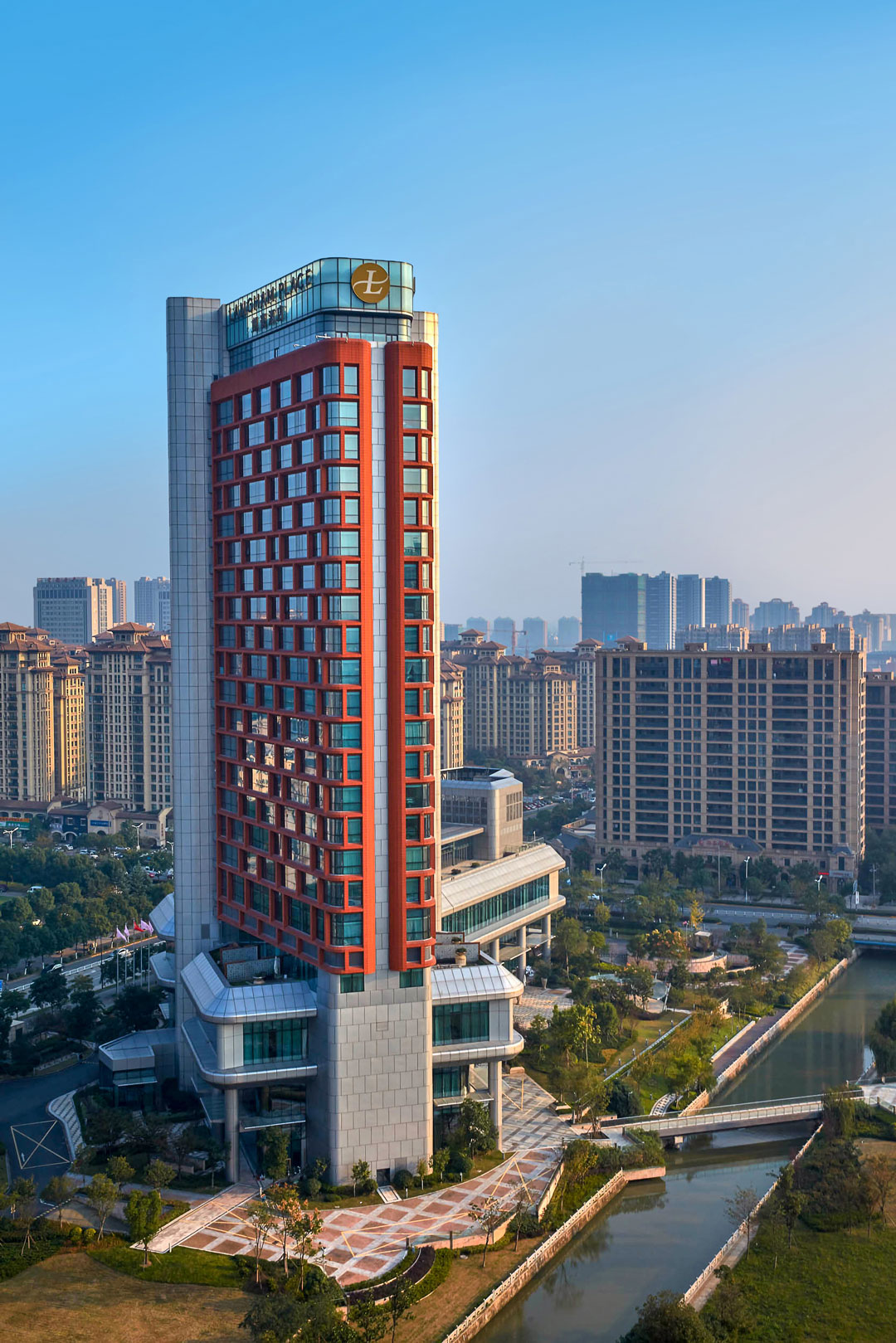 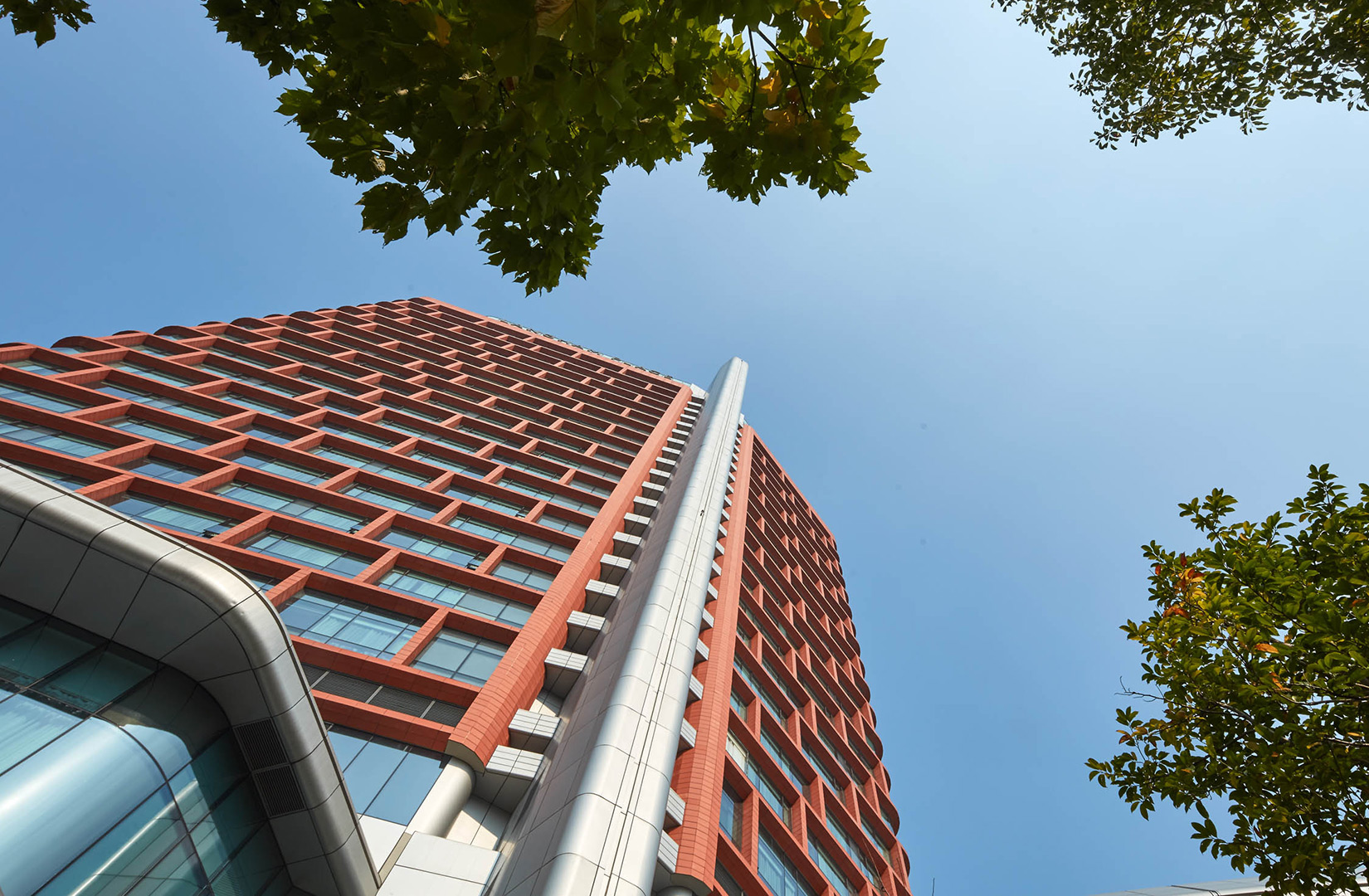 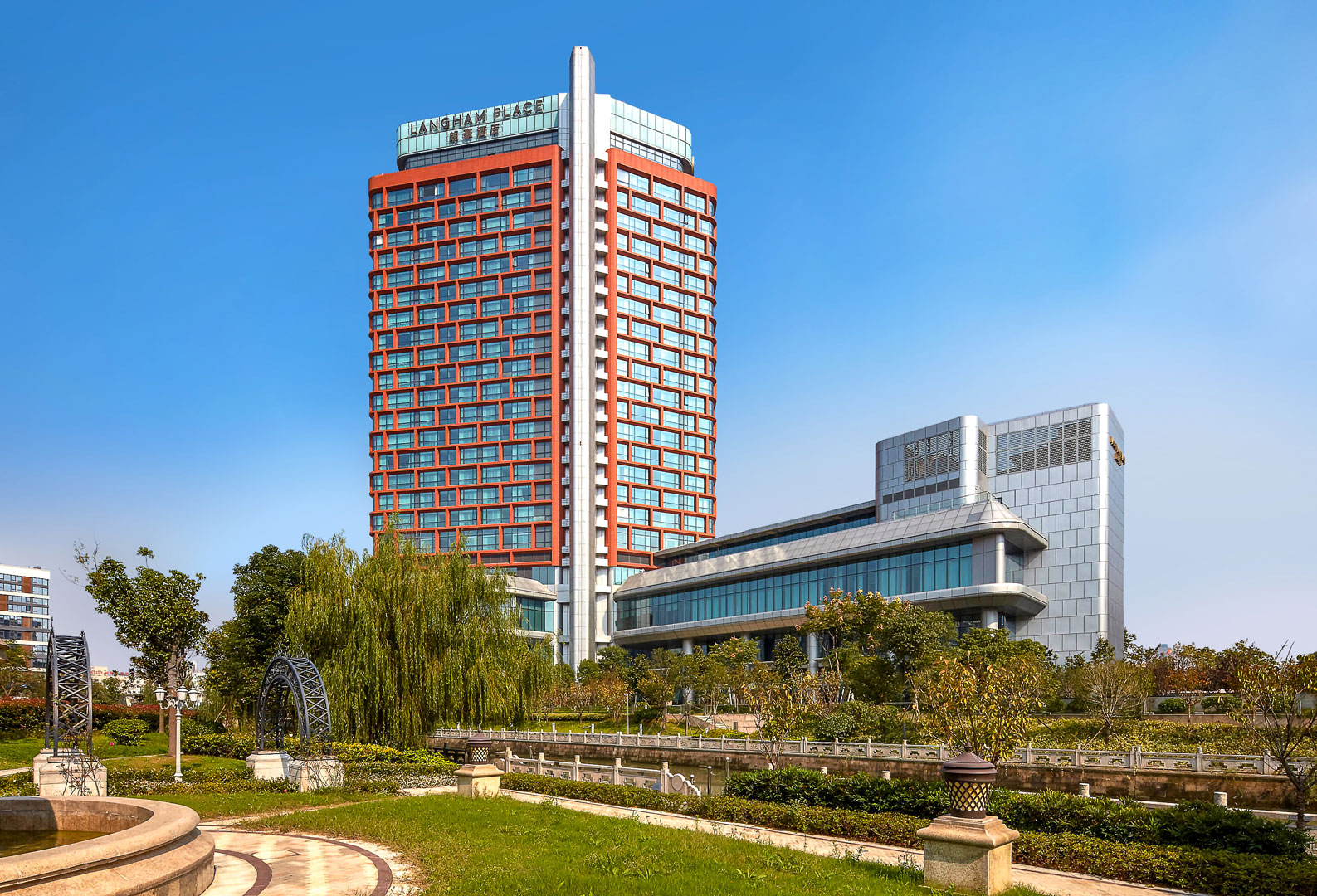 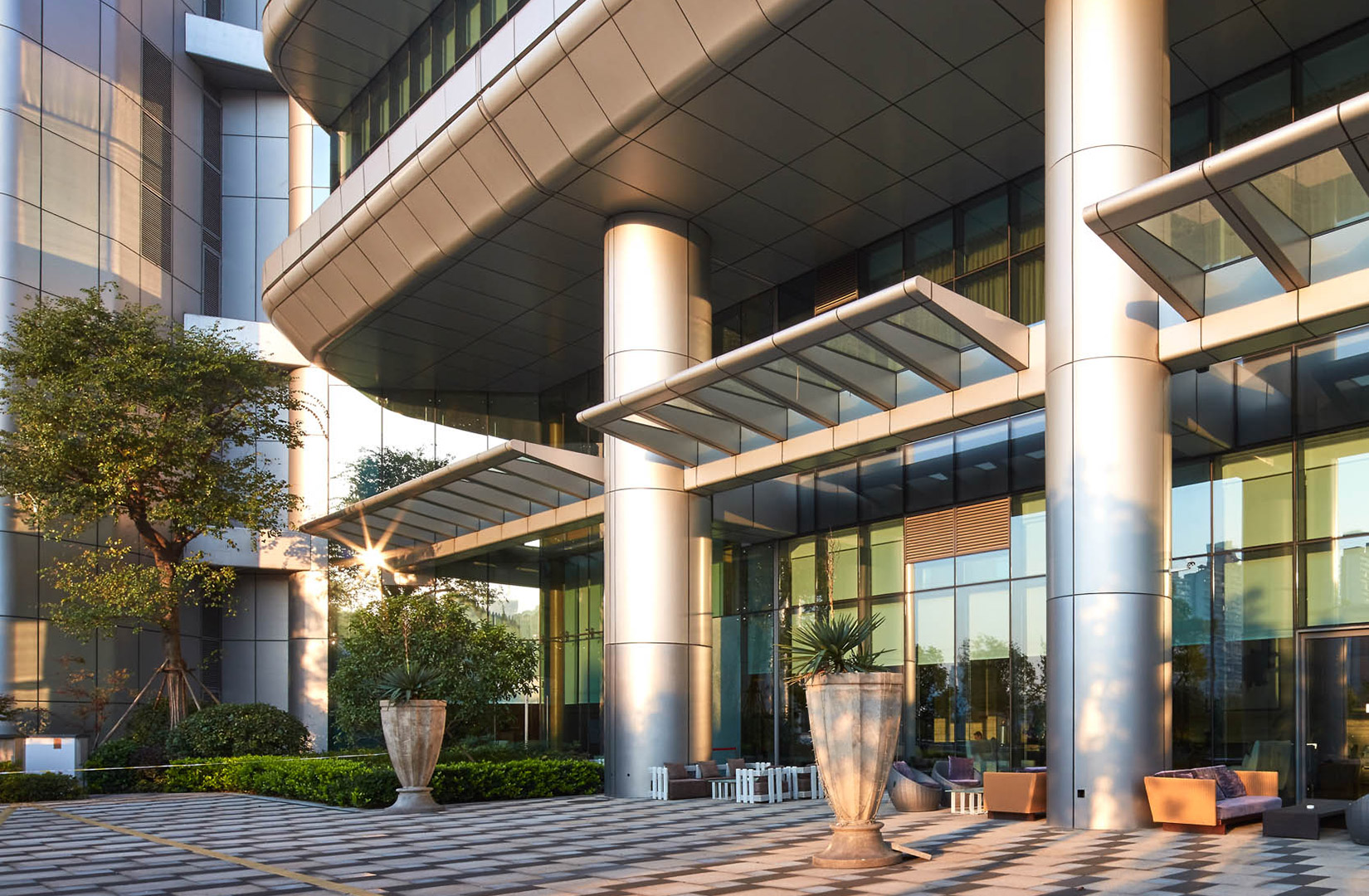 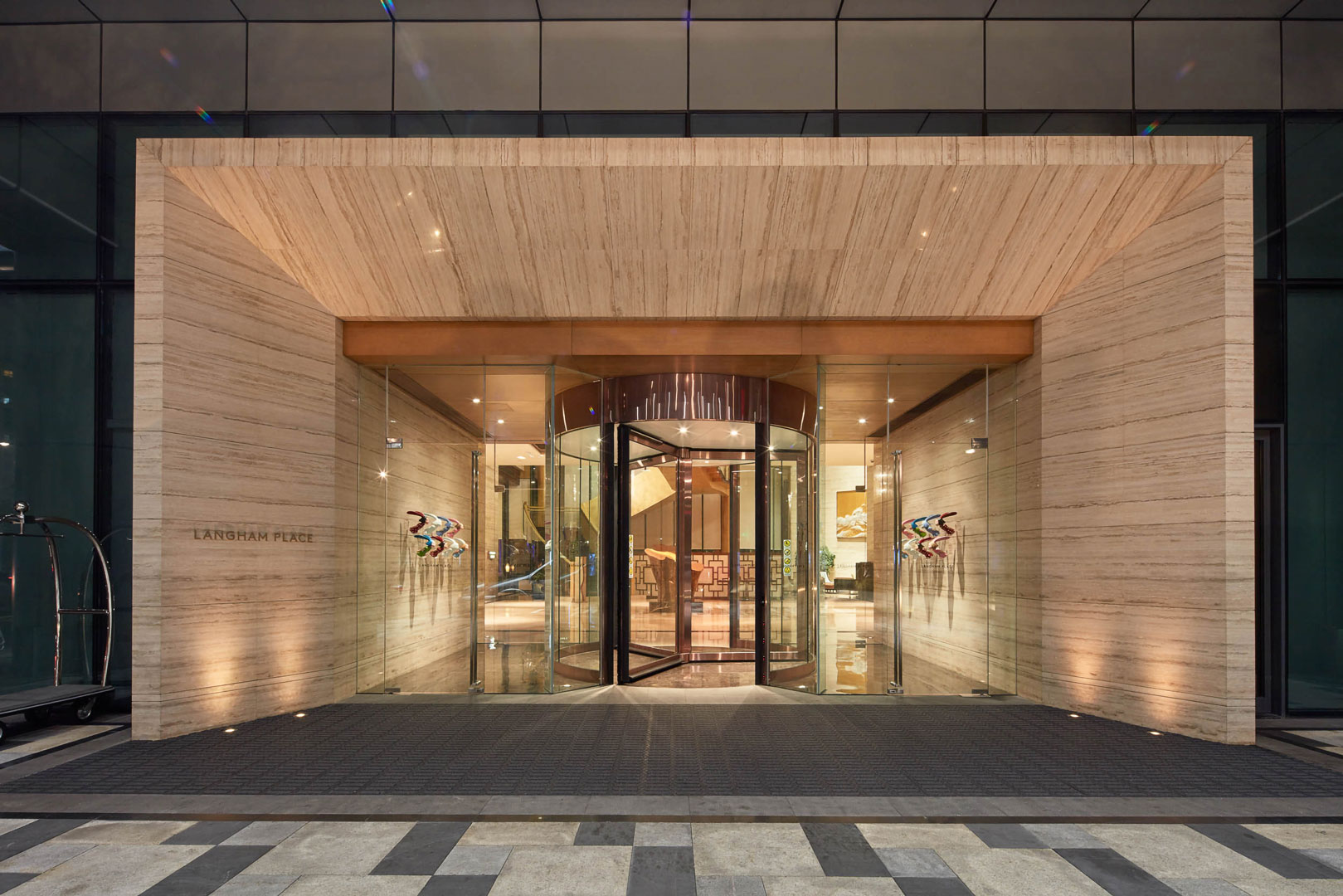 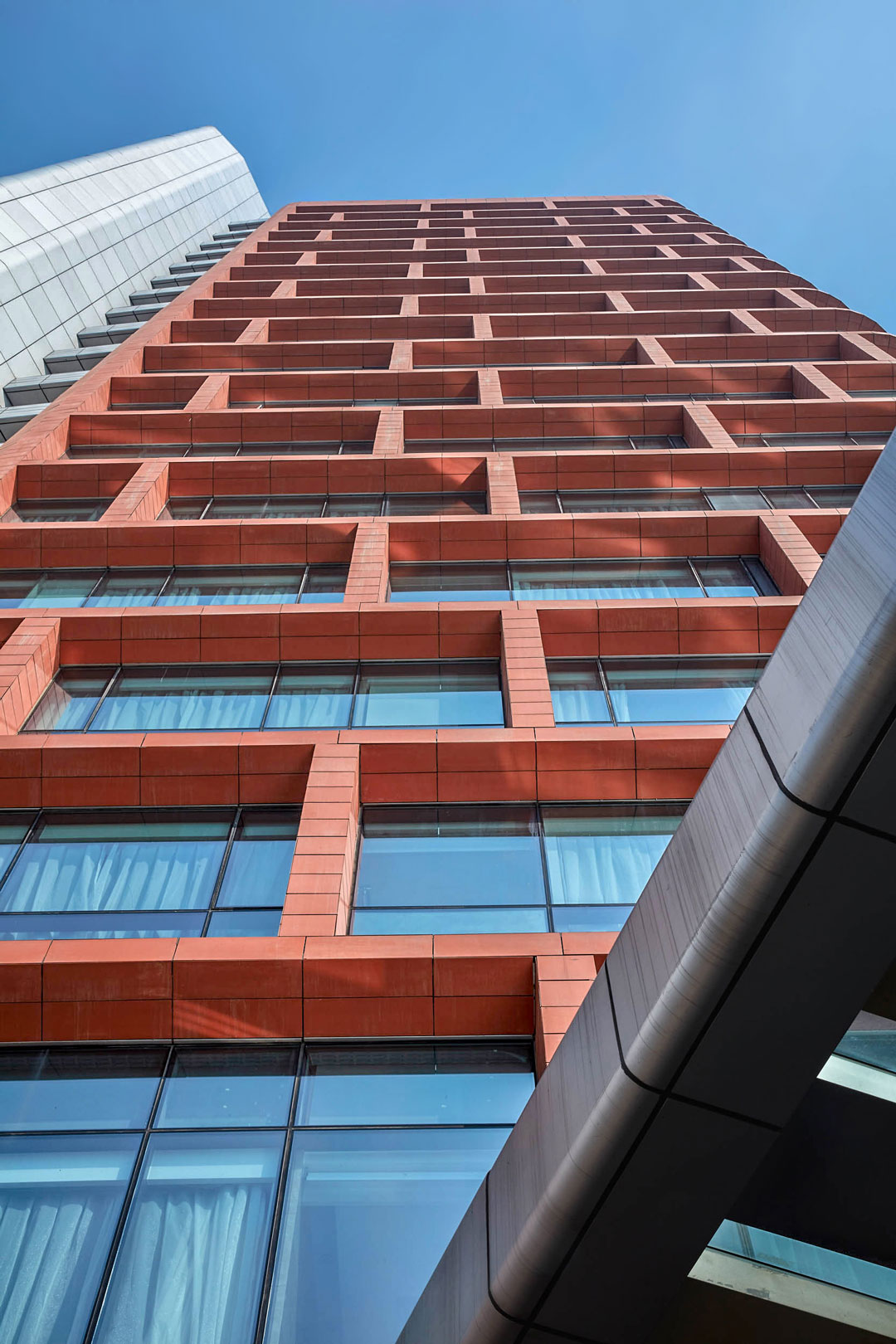 
This project, in the coastal city of Haining, was inherited from a previous architect and the intention from the outset was to make the building (a hotel) a model of what could be aspired to in contemporary China.

The aim was to build a comprehensively sustainable building with a form which not only reconciled an international modernist aesthetic with traditional Chinese architecture, but also represented a perfect fusion of form and function.

The building has subsequently been modified without consultation with the architects, involving the removal of key elements ─ namely, the energy-generating ‘propellers’ down the side and on top of the building ─ and the addition of random elements (referred to as “tumours” by Massimo Mercurio) which severely compromise the integrity of the original design. Some of the original elements survive, such as the intriguing fenestration whereby the windows are off-set to one another to create the impression of a woven fabric, thus giving the façade a haptic, textural quality. Also the podium retains its original dynamic character with two, giant intersecting vertical and horizontal blades, like interlocking wings.

However, the signature element of the building ─ the propellers or windmills ─ is now missing. Being a coastal city, Haining enjoys sea breezes. So, harnessing wind power became the key sustainable feature. The building itself was oriented to capture these winds which for most of the time blow along a northwest-southeast axis. The propellers were to be housed in a massive ‘wing’, extruding on either side of the hotel tower as blades, and extending above the building to a height of 150 metres. An additional twelve 9-metre wide propellers were inserted down the wind tower, six on either side. The hotel tower itself was given a dynamic, moulded wing-like profile, helping to accelerate prevailing lateral winds through the side propellers.

The sustainable agenda was enhanced by hot water sun panels on the top of the podium service block, oriented southeast and barely visible from the street. These are augmented by photovoltaic cells on the skylight of the podium whose skin is a double-layer glass façade providing insulation and moderating energy use internally, complementing the double-layer sunshading provided by the podium. At the same time, the window wall system optimises insulation between floors and reduces heat loss in winter, while the external cladding, a ventilated façade of terracotta, offers excellent thermal properties in both summer and winter.

While the interlocking building and wind towers offer a powerful symbol of modernity, the relationship of the articulated podium and heaven-seeking tower conjures up the spirit of traditional Chinese structures (as in the base and keep of temples). This is supported by the use of terracotta in the patterning of the tower cladding system which recalls traditional windows and doorways.

Langham Place exemplifies MDL’s ongoing quest to fuse form and function, to create buildings which can stand alone as aesthetic objects while also still fulfilling all their programmatic requirements. In this sense, the building does not just serve its own needs, but makes a contribution to its physical and cultural context through its aesthetic and symbolic properties.