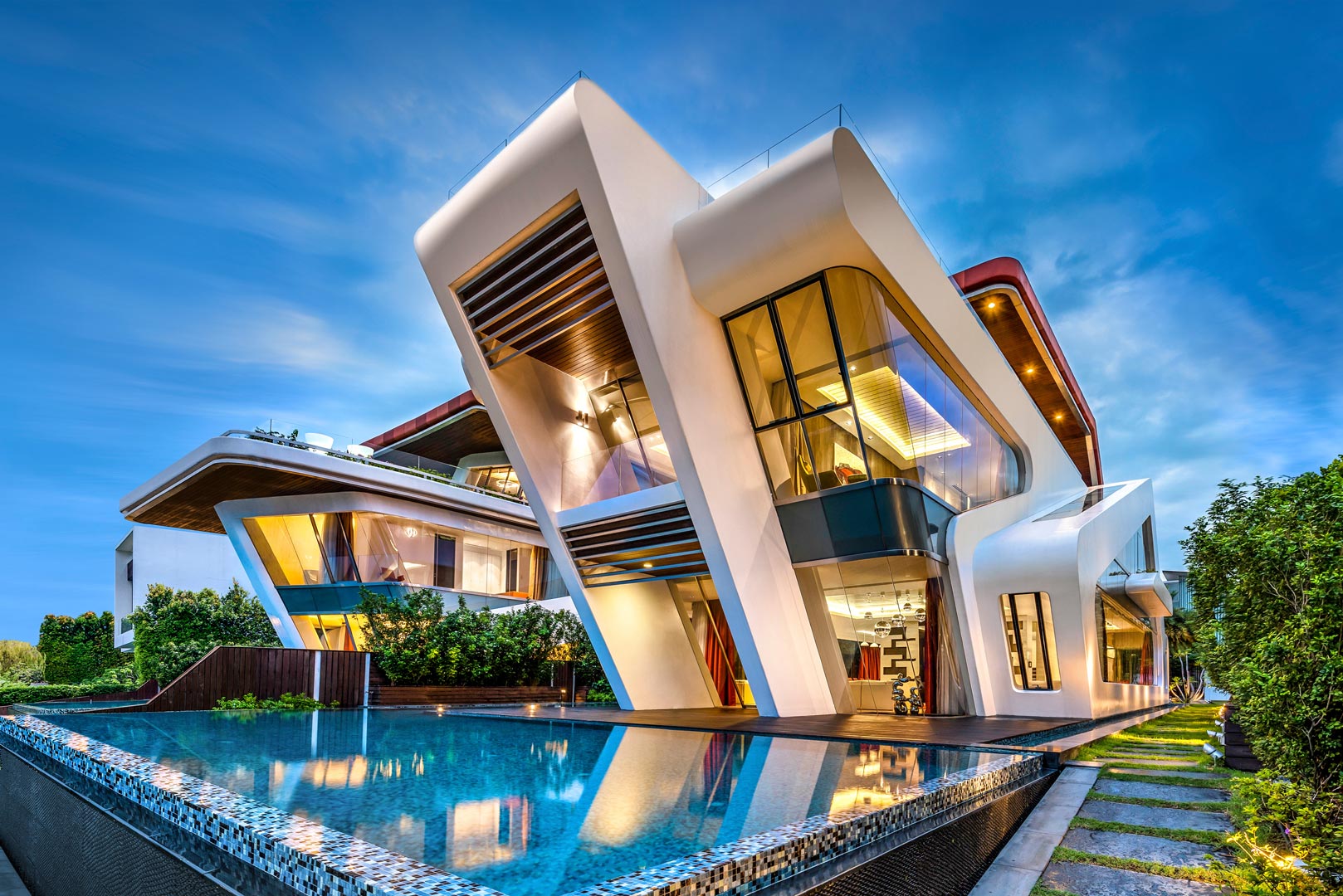 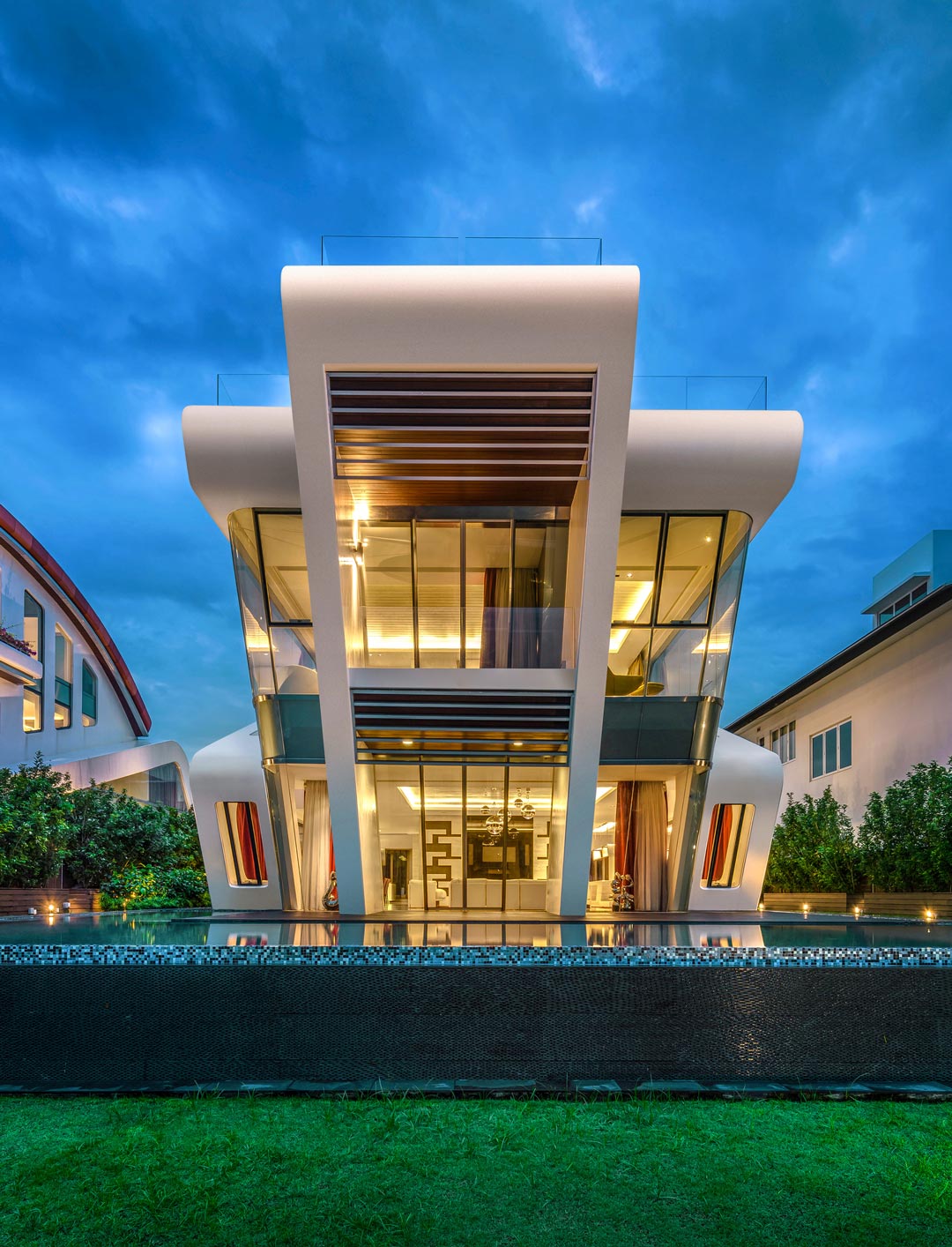 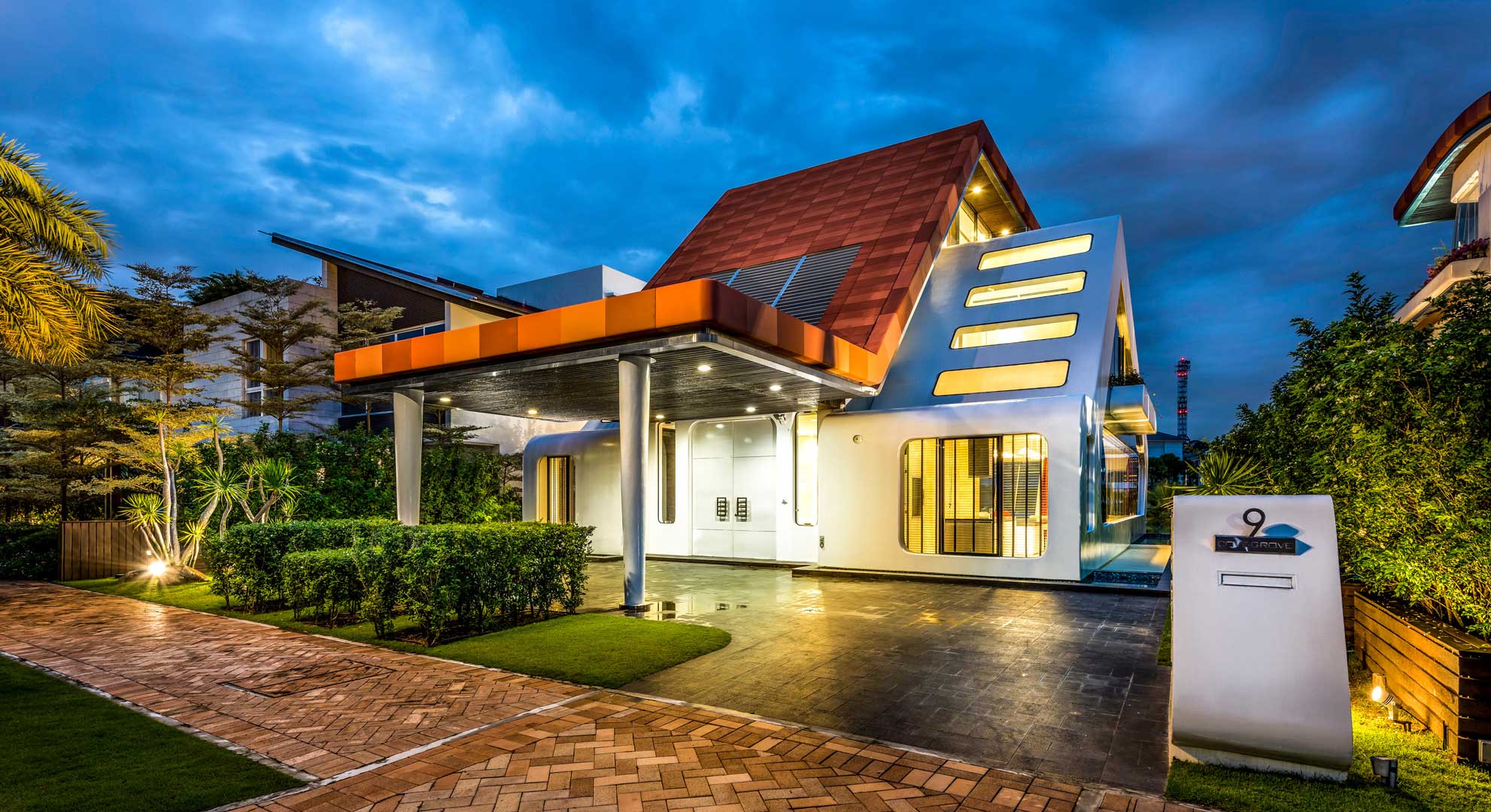 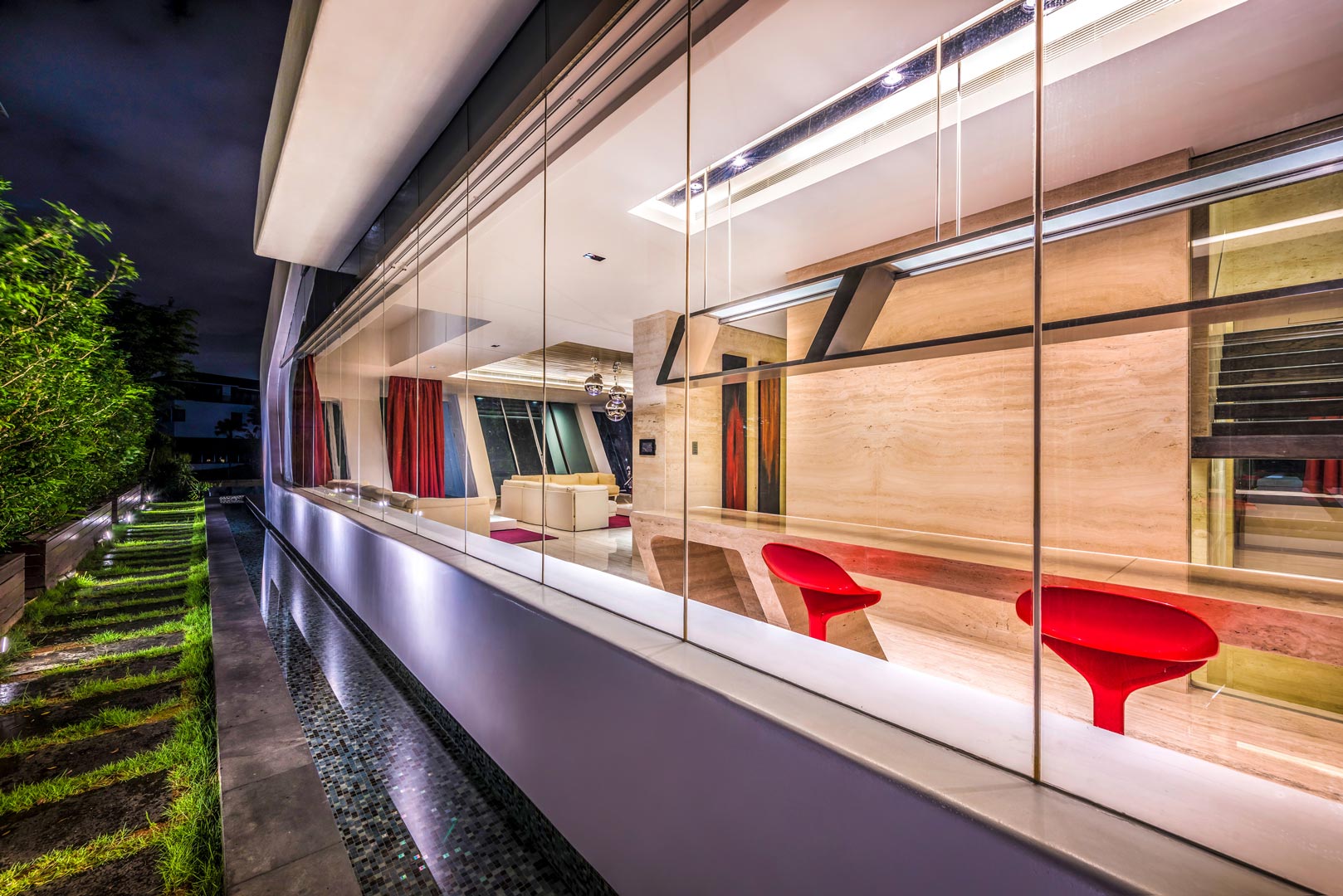 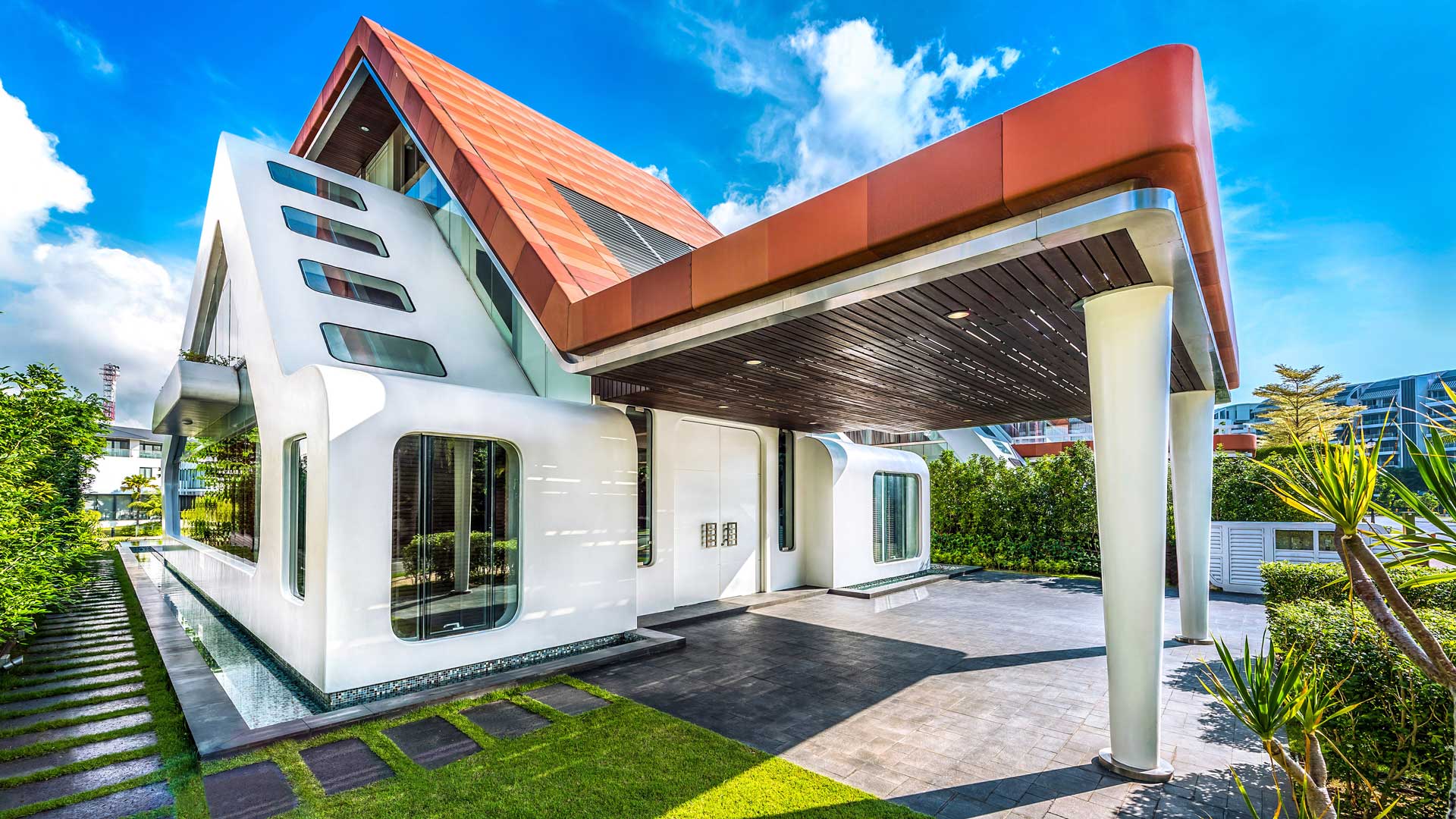 
Named after the seasonal strong, north-westerly wind that blows across the Mediterranean, Mistral is less like a cabin cruiser and more like a sleek cruise ship. Painted in a slightly different white to Vento, but also with a metallic tinge, Mistral has a powerful solidity to it. Like Vento, its structural elements are expressed both externally and internally, simultaneously referencing a boat and communicating the sense of a strong forward thrust.

It exploits the angularity of outward-leaning structural elements and similarly angled glazed walls to fashion an almost vertiginous experience both inside and outside of a powerful vessel driving through the sea.

As with Vento, the street elevation of Mistral combines timber and concrete in a façade penetrated by windows of varying scale to generate a strong rhythmic quality. This is complemented by the forward-thrusting angularity of the building which leads the eye towards the water which is only barely glimpsed at this stage.

Again like Vento there is a carefully orchestrated sequence of arrival designed to heighten expectation and ensure maximum drama with the final reveal of the view. Floating concrete slabs form a footbridge linking the porte cochère across a pond with the entry vestibule. Here a sculpted travertine wall (screening the stairwell) drives the circulation to either side, delaying the final dramatic tableau.

Mistral is over four levels, including a large entertainment room in the basement. Dining, dry kitchen and living are on the entry level, while level two consist of bedrooms and a roof terrace overlooking the canal. The bedrooms on level two, including the master bedroom, are to the side with one at the rear (streetside) with views back to the ocean.

With Mistral ─ as with Vento ─ the structure is the form. There is total integration, just as the project as a whole is assimilated with MDL’s building design, interior architecture, decoration, furnishings and art works. “The only thing we haven’t done,” says Massimo, “are the plates and dishes.” It is an example of what he calls a complete solution ─ complete also for the way it accommodates the client’s preoccupation with " feng shui, harmonising wind and water.
The two houses also exemplify the way MDL pushes the envelope formally and structurally. They invariably present a challenge to the contractors both structurally and in terms of detailing ─ for example, making and installing windows which fully integrate into the curved facades.

But they also represent an aesthetic challenge. These are unique, if not idiosyncratic forms. Given Massimo’s love of ‘symbology’, it is not surprising that houses like Vento and Mistral have a story to tell, which begins on the outside where their forms and their landscaping blend to generate an integrated whole which then extends to the interiors, where the interior architecture, the materials and the planning ─ not to mention the customised artworks and other decorative elements ─ all work together to generate narratives unique to each building.